The Cinema of Sergei Parajanov 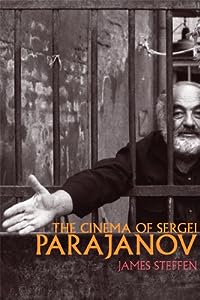 Order the book using this flyer and get a 30% discount.

Sergei Parajanov (1924–1990) flouted the rules of both filmmaking and society in the Soviet Union and paid a heavy personal price. An ethnic Armenian in the multicultural atmosphere of Tbilisi, Georgia, he was one of the most innovative directors of postwar Soviet cinema. Parajanov succeeded in creating a small but marvelous body of work whose style embraces such diverse influences as folk art, medieval miniature painting, early cinema, Russian and European art films, surrealism, and Armenian, Georgian, and Ukrainian cultural motifs.

The Cinema of Sergei Parajanov is the first English-language book on the director’s films and the most comprehensive study of his work. James Steffen provides a detailed overview of Parajanov’s artistic career: his identity as an Armenian in Georgia and its impact on his aesthetics; his early films in Ukraine; his international breakthrough in 1964 with Shadows of Forgotten Ancestors; his challenging 1969 masterpiece, The Color of Pomegranates, which was reedited against his wishes; his unrealized projects in the 1970s; and his eventual return to international prominence in the mid-to-late 1980s with The Legend of the Surami Fortress and Ashik-Kerib. Steffen also provides a rare, behind-the-scenes view of the Soviet film censorship process and tells the dramatic story of Parajanov’s conflicts with the authorities, culminating in his 1973–77 arrest and imprisonment on charges related to homosexuality.

Ultimately, the figure of Parajanov offers a fascinating case study in the complicated dynamics of power, nationality, politics, ethnicity, and culture in the republics of the former Soviet Union.

“In the temple of cinema, there are images, light, and reality. Sergei Parajanov was the master of that temple.”—Jean-Luc Godard

“Steffen has managed to capture Parajanov’s unique style in a language that is simple and elucidating, making you want to watch his films again and again.”—Birgit Beumers, editor of Studies in Russian and Soviet Cinema

A Mellon Slavic Studies Initiative Book. This book is part of an initiative for publishing first books by scholars in the fields of Russian, East European, and Central Asian Studies, supported by the Andrew W. Mellon Foundation.

“Steffen is a sure-footed elucidator of the mysteries of the director’s oeuvre. His is the first English-language book on the subject, and combines perceptive readings of the films with erudite interpretations of Transcaucasian history and culture and of Soviet cinema and politics […] an absorbing portrait of artist as a brilliant gadfly, agent provocateur and courageous defender of his own personal vision.” Julian Graffy, Times Literary Supplement

“[R]iveting behind-the-scenes accounts of the many diplomatic battles Parajanov fought in order to realise his unconventional vision […] perhaps the book’s greatest value lies in its exploration of his many unrealised projects […] Steffen supplies plenty of verbal colour.” Michael Brooke, Sight & Sound – PDF here

“[A] book to celebrate. […] Steffen’s research draws extensively on holdings in state archives and in the Parajanov museum, and it will offer future scholars many new leads. […] He has filled in countless gaps in our knowledge, particularly in his fine reconstruction of the film Kyiv Frescoes (1965-66), on which production was stopped, and his superb account of the censorship history of The Color of Pomegranates. […] [W]e can be very grateful for this generous, intelligent and deeply responsible book.” Stephanie Sandler, The Russian Review.

“This superbly researched book, the first in English about the late [Soviet] filmmaker, is written by a prodigiously well-informed historian of Soviet cinema. […] Steffen offers a vibrant, probing biography of Parajanov through his works.” S. Liebman, Choice

“[A] superlative exploration of original sources and some fine film analysis, which is unlikely to be surpassed for some time. […] By revealing rather than mythologising Parajanov, Steffen’s book is a godsend for people teaching or studying film, as well as those who have come away from watching Parajanov inspired and intrigued, but also overwhelmed by the wealth of elements in his films […]” Giuliano Vivaldi, Senses of Cinema

“The author did remarkable work in reconstructing the director’s world.” David Luhrssen, Expressmilwaukee.com

Paley, Toney. “The Colour of Pomegranates: a chance to savour a poetic masterpiece.” The Guardian. October 7, 2014.

4 Responses to The Cinema of Sergei Parajanov