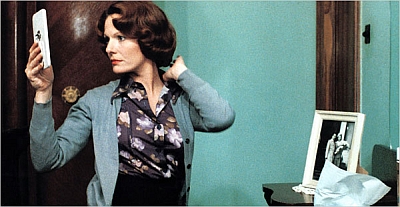 I have to confess that I’ve never seen Jeanne Dielman, though it is finally available on DVD from the Criterion Collection. I’ve been waiting instead to see a good 35mm print, since what I’ve read so far indicates that this is one film which demands the finely rendered visual texture and sense of space that only a theatrical presentation can provide.

If you haven’t seen any of Chantal Akerman’s films, her Seventies work is fascinating as an extreme example of the long-take aesthetic. Individual shots often run for several minutes without a cut, unfolding in real time while very little seems to happen story-wise. It’s a calculated challenge to the viewer, but the cumulative effect can be surprisingly moving, especially in News From Home (1977) and Les Rendez-vous d’Anna (1978).
Criterion is putting out an Eclipse set of Akerman’s other Seventies films in January 2010.

I'm currently the Film Studies and Media Librarian at Emory University in Atlanta. Although my primary passion and expertise is in film, I also love literature, music and other arts.
View all posts by James Steffen →
This entry was posted in Film, News. Bookmark the permalink.