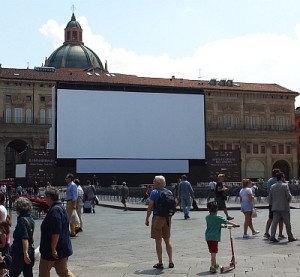 The outdoor screen at the Piazza Maggiore. It is much larger than it looks in this photo!

This year I finally had the opportunity to attend–and participate in–the annual Il Cinema Ritrovato film festival in Bologna, Italy. Hosted by the Cineteca di Bologna, the festival features a truly global range of newly restored films, retrospectives and curated glimpses into forgotten avenues of film history. Screenings take place in the Cineteca’s screening rooms and the nearby Arlecchino and Jolly cinemas, to say nothing of nightly public screenings on the city’s main square, the Piazza Maggiore. Attendees at the festival regularly include film archivists and historians, distributors, critics and journalists. Thanks to the festival’s congenial atmosphere, it offers excellent networking opportunities for people working in those areas.

In fact the festival offers far more screenings and other events than one person can possibly take in, requiring difficult choices. One of the festival’s regular sidebars is entitled “One Hundred Years Ago” (“Cento anni fa”); it is now moving into the first major feature films. This year’s edition of the festival (2014) included a screening of Giovanni Pastrone’s groundbreaking 1914 feature Cabiria with a live orchestra. For those specializing in American cinema, this year there were sections on restored James Dean films and “William Wellman: Before Silent and Sound.”

For me, arguably the most exciting program this year was “Riccardo Freda: A Master of Popular Cinema.” I’ve long admired Italian popular cinema, especially the horror films of Mario Bava, and have seen a couple of Freda’s horror films, but this series filled an important gap in my understanding of Italian cinema of the postwar era. Black Eagle/Aquila Nera(1946) is a sumptuously mounted, exciting adaptation of Alexander Pushkin’s story “Dubrovsky.” I Miserabili (1948), Freda’s ambitious two-part adaptation of Victor Hugo’s Les Miserables, may not displace Raymond Bernard’s 1934 5-hour French version as the definitive screen version of the novel, but it holds up surprisingly well and has a strong lead performance by Gino Cervi. Theodora, the Slave Empress/Teadora Imperatrice di Bisanzio (1953) represents studio filmmaking at its most entertaining, with taut pacing and strong lead performances. Georges Marchal as Justinian is a dimwitted hothead, while Gianna Maria Canale as Theodora is beautiful, crafty and wise. The climax, in which leopards and other big cats are unleashed upon soldiers, transforms into a deliriously stylized montage. Freda’s The Horrible Dr. Hichcock/L’orribile segreto del Dr. Hichcock (1962) is still one of the most atmospheric and perverse Italian Gothic horrors, although the only print available for screening was badly worn. Not one of these films by Freda is officially available on DVD with English subtitles, which is precisely why festivals such as Il Cinema Ritrovato are so valuable for film scholars. Another section that I attended heavily was “The Golden ’50s: India’s Endangered Classics, ” which included a rare (and severely worn) CinemaScope print of Guru Dutt’s magnificent Kaagaz ke Phool/Paper Flowers (1959), the first widescreen film made in India, Ritwik Ghatak’s Ajantrik (1958) and Bimal Roy’s Do Bigha Zamin (1953). Also of interest was “Polish New Wave and CinemaScope,” which included rare 35mm prints of Andrzej Munk’s The Passenger (1963) and Sergei Yutkevich’s Lenin in Poland (1966). (Some of the same Polish films will screen in restored DCPs at Emory University this fall, as part of the Martin Scorsese Presents/Milestone Films touring retrospective entitled Masterpieces of Polish Cinema.)

One of the festival’s most important roles is to showcase film restoration work. In that regard, the great revelation for me was Murnau Stiftung and Cineteca di Bologna’s latest digital restoration of Robert Wiene’s Expressionist classic The Cabinet of Dr. Caligari (1920), which used the surviving camera negative extensively. It truly brought out the beauty and craftsmanship of the film’s cinematography—not always apparent in previously available versions—to say nothing of many subtle facial expressions in the performances. For me, even the film’s notorious painted sets revealed a stylistic variety that I hadn’t appreciated before; Wiene’s film in fact functions partly as an homage to modernist painting circa 1920. During one of the festival’s numerous educational programs, Anke Wilkening from the Murnau Stiftung outlined the film’s complex restoration history and discussed the methodology behind this latest attempt. Other restoration highlights included Raymond Bernard’s classic antiwar film Wooden Crosses (1932), Vittorio De Sica’s Marriage Italian Style (1964) and King Hu’s Dragon Inn (1967). Roundtables and lectures on restoration included Ned Price (Warner Brothers), Grover Crisp (Columbia) and Schawn Belston (20th Century Fox).

My own participation in the festival was connected with the Film Foundation/World Cinema Project and the Cineteca di Bologna’s newly completed restoration of Sergei Parajanov’s masterpiece The Color of Pomegranates/Nran guyne (1969). (I served as a historical consultant on the film’s production and censorship history, wrote a text for the program catalog, and helped introduce the June 28 screening of the film.) Olivia Harrison, through George Harrison’s Material World Charitable Foundation, had graciously funded the restoration and mentioned during her introductory remarks how Martin Scorsese, who is a great admirer of Parajanov, had sparked her interest in the director by giving her a DVD box set of his films. Although I have seen the film many times on various 35mm prints and on DVD, this was my first time seeing the new restoration of the Armenian release version. They restored both the Armenian release version and the re-edited Yutkevich version, though they selected the Armenian version for theatrical exhibition. Most of the restoration comes from a 4k scan of the camera negative, and I can say that it on the whole it looks better and more consistent than I have ever seen it. I even spotted colors and details that I had never noticed before in a number of shots. (I will write more about it in a separate blog entry.) 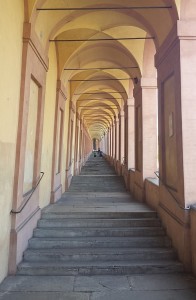 The long ascent to the Madonna di San Luca, on a hill overlooking Bologna

It is worth taking extra time to explore the city of Bologna, a fascinating destination in its own right. The city center is based on a medieval walled city, and although it was heavily bombed during World War II, a large number of original structures still remain. For me one of the most fascinating places was the Basilica di Santo Stefano complex, parts of which back to the 5th century. If you are in good physical condition, I recommend following the very long arched walkway from the Porta di Saragozza up to the Sanctuary of the Madonna di San Luca. The city is also home to one of the world’s oldest universities and benefits from a thriving student culture and progressive political outlook; its annual LGBT pride parade and festival took place at the same time as Il Cinema Ritrovato. And of course Bologna is known for outstanding food, including hand-rolled pasta and many varieties of hams and salamis. Perhaps what I enjoyed most was the presence of so many people out on the street socializing, even late at night. The Italians know how to live.

(Originally published on the Woodruff Library Blog, July 29, 2014, with some minor changes added.)

One Response to Notes on Il Cinema Ritrovato