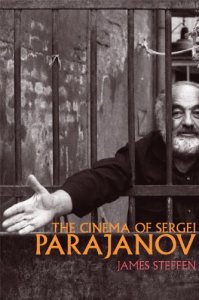 In the January 2015 issue of Choice, my book The Cinema of Sergei Parajanov (University of Wisconsin Press, 2013) has been selected as an “Outstanding Academic Title” for 2014 in Film.

Choice is a publication of the Association of College & Research Libraries and the American Library Association. Every year, the editorial board selects about 10% of the titles reviewed in Choice for inclusion in a list of Outstanding Academic Titles. For more about the editorial board’s criteria for selecting the annual list of Outstanding Academic Titles, read here. For more about Choice as a publication, read here.

In the June 2014 issue of Choice, S. Liebman wrote: “This superbly researched book, the first in English about the late Russian filmmaker, is written by a prodigiously well-informed historian of Soviet cinema. Steffen […] offers a vibrant, probing biography of Parajanov through his works. […] [T]his lucid study is a must for all students of Russian and Soviet cinema.”

I'm currently the Film Studies and Media Librarian at Emory University in Atlanta. Although my primary passion and expertise is in film, I also love literature, music and other arts.
View all posts by James Steffen →
This entry was posted in Parajanov. Bookmark the permalink.