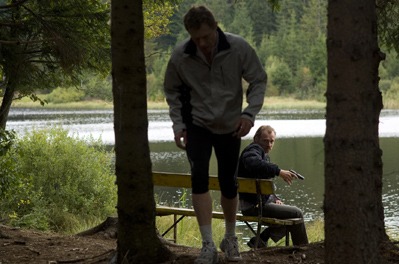 I just saw Götz Spielmann’s Revanche (Austria, 2008) at the Landmark Midtown and strongly recommend it. Starting this Friday (July 31) it’s moving to the Plaza Theatre, so there’s still a chance for fellow Atlantans to see it on the big screen.

This is an unusual instance where Janus Films, long known for distributing arthouse classics by directors such as Bergman and Kurosawa, has picked up a new film. Actually, it’s a worthy addition to their catalog and more than deserved its Academy Award nomination for Best Foreign Film; I think it will continue to attract a following after it has been released on DVD and (especially) Blu-ray.

Spielmann’s spare, restrained directorial style reminds me of Robert Bresson and the Dardenne Brothers. It’s arguably too long at 121 minutes, but the deliberate pacing does allow for the gradual revelation of character that the film’s underlying conception requires. The plot concerns Alex (Johannes Krisch), an ex-con and a handyman at a brothel, who falls in love with Tamara (Irina Potapenko), a Ukrainian prostitute, and nurtures plans to rescue her by scoring a large sum of money and fleeing the country. After a failed bank robbery, he takes refuge in the countryside, where his aging father (Hannes Thanheiser) lives on a farm. Inevitably he runs into conflict with the neighbors, which include Susanne (Ursula Strauss), a young woman who takes Alex’s father to church every Sunday, and her husband Robert (Andreas Lust), a police officer.

What I have in mind by comparing Spielmann to Bresson and the Dardenne Brothers is a specific set of stylistic devices. First, the film lacks a conventional music score, relying instead on natural sounds which often become significant motifs in their own right. The two most striking examples of this are the buzz saw and the sound of the father’s accordion playing. Ambient sounds also serve to evoke the powerful presence of nature in the Austrian forest.

Another of the film’s Bressonian traits is its use of meticulously composed static shots that recur as visual motifs. At times the stationary camera results in a disconcerting use of offscreen space, such as when Alex walks off camera in the hotel room but we continue to hear his voice, or in another shot in the farmhouse where he suddenly stands up and his head goes out of frame while the camera remains in a low position. (Usually the camera operator will pan or crane up to keep the actor’s head in frame.) Martin Gschlacht’s cinematography is the most beautiful work I’ve seen in a while; it uses mostly natural light to create subtle gradations of light and shadow that function thematically, but not in any overly obvious way. Ultimately, the film’s terse but richly suggestive style serves to underline the deeper spiritual dimension of the film, which becomes apparent as it unfolds. The tranquil closing shot is unforgettable.

However, I don’t want to leave the mistaken impression that Revanche is purely an exercise in style. The performances are vivid and assured across the board, and I loved how Spielmann convincingly depicts the unglamorous daily operations of the brothel. For instance, we see Alex restocking the sheets and the prostitutes chatting in the break room. At the same time, seemingly offhanded remarks by the brothel owner take on unmistakably sinister undertones, reflecting the underlying brutality of the system. If you don’t see this film on the big screen, I recommend at least seeing it on Blu-ray, since its remarkable sense of space and place will inevitably lose some impact on DVD.

One Response to Revanche