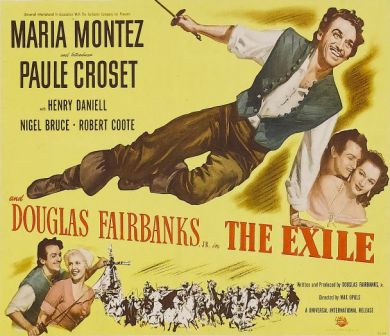 If you have access to Turner Classic Movies, make sure to catch the Monday, January 23 program Max Ophuls in Hollywood, a rare opportunity to see all four feature films that Ophuls completed in the late Forties. The films are:

Amazingly, none of these films has an official DVD release yet in the US. The Reckless Moment and The Exile are receiving their TCM broadcast premieres. I haven’t seen The Exile in its entirety, but the opening sequence of the film showcases Ophuls’ and the cinematographer Franz Planer’s expressive camera movements.

A source at Turner Broadcasting System has kindly provided the following information:

THE EXILE was the first film that Ophuls was able to make after some seven years of residence in the U.S. .Ophuls had fled Europe in the wake of Hitler’s rise, and it took him that long to get a project completed after he had settled in Hollywood. Ironically, it was the publicity garnered by Ophuls’ firing from a project for Howard Hughes that prompted another expatriate director, Robert Siodmak, to recommend the director for a film at Universal that Douglas Fairbanks, Jr. was planning to write, produce and star in: the story of Charles II’s exile in the Netherlands, in hiding from Oliver Cromwell’s Roundheads, the latter led by a villain played by Henry Daniell. The film was to be Fairbanks Jr’s tribute to the swashbuckling epics of his celebrated father.

Rejoined with his cinematographer Franz Planer, with whom he had last worked 15 years prior to THE EXILE in Germany, Ophuls was able to revel in the resources of top Hollywood studio craftsmen and technicians. The camera was able to track, swoop and crane effortlessly over the studio sets, utilizing to the fullest extent the director’s signature technique. Far from being a rousing swashbuckler, although it has all the requisite elements, the overall tone, befitting an Ophuls project, is a bittersweet one, as embodied by the romance between the exiled king and a farmer’s daughter, the latter played by Paule Croset (Rita Corday). Surprisingly, Universal contract siren Maria Montez also makes an appearance, and in just a couple of memorable scenes becomes part of the illustrious roster of Ophuls heroines, far from the camp appeal she embodied in films like COBRA WOMAN.

TCM’s showing of THE EXILE is unique and quite special for a couple of other reasons. The film transfer utilized by TCM is sourced from archival elements deposited at the Library of Congress by Universal, so pictorially the film will look its best. Additionally, after the film is shown, Robert Osborne will return to introduce the film’s alternate “European” ending which was also in the Library of Congress’s Universal materials. The alternate ending to THE EXILE (some 90 seconds) is basically appended to the existing ending of the domestic version of the film, followed by a close up of a commemorative plaque with which both versions of the film begin & end, bringing things full circle.  This “alternate” was the way the film was originally scripted to end – and is the way Ophuls preferred the film to end – but as it wasn’t considered an “essential” scene, the script pages were on the shooting schedule’s chopping block. Ophuls prevailed upon Fairbanks to let him shoot the scene anyway, and he did so, although it ended up not being seen by very many, even in Europe, where it was originally intended to be part of the foreign-release prints. Now, thanks to TCM, we get to glimpse this extremely rare footage. The ending, brief as it is, makes the film’s tone even more bittersweet and adds immeasurably to its overall impact.

Finally, a note on the director’s credit on the film: “Max Opuls.” This is not a misspelling, but a revision suggested by Douglas Fairbanks, Jr., and it was used as the credit for all the films Ophuls completed in Hollywood.

The only thing I can add is that the other broadcast premiere, The Reckless Moment, is also essential viewing. This smaller scale, tautly directed crime thriller features one of Joan Bennett’s finest performances, as a mother attempting to cover up her daughter’s possible involvement in a murder. The film was remade in 2001 as The Deep End, starring Tilda Swinton.