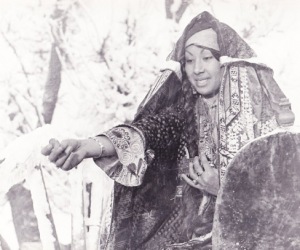 The cinemas of the Central Asian republics are still terribly underappreciated relative to both Soviet cinema and world cinema as a whole, although some films of the Kazakh New Wave did achieve festival screenings in the 1990s and limited distribution in the U.S. thanks to the efforts of Forrest Ciesol. Encouragingly, Ermik Shinarbaev’s Revenge (Kazakhstan, 1989) was restored in 2010 by the World Cinema Foundation.

During the Soviet era, Ali Khamraev was among the most widely seen filmmakers from Central Asia, thanks especially to his action films The Seventh Bullet (1972) and The Bodyguard (1979). Those films belonged to a genre of action films popularly known as “Easterns”–taking their cue from Westerns–which typically depicted the Red Army fighting the Basmachi movement in the aftermath of the 1918-1923 Civil War. Both were also based on scripts by Andrei Konchalovsky. (Another film in this genre, Vladimir Motyl’s The White Sun of the Desert (1970), remains among the most popular and widely quoted of all Soviet-era films.)

I have not seen Without Fear (1972), but a while back I did manage to see an unsubtitled print of the remarkable Man Follows Birds (1975), which stands out as an important contribution to the poetic cinema movement in Sixties and Seventies Soviet cinema. In his overview of Khamraev’s works the film scholar Robert Bird rightly points out that Khamraev’s visual style in Man Follows Birds consciously alludes to Andrei Tarkovsky and Sergei Parajanov. However, I do not think such influences flowed only one way. While I can’t speak for Tarkovsky, Parajanov himself was certainly familiar with (and I would argue was likely influenced by) the experiments of other regional filmmakers such as Yuri Ilyenko in Ukraine and Tengiz Abluladze in Georgia during the Sixties. With regard to Khamraev in particular, Parajanov later hired on Yuri Klimenko, the cinematographer for Man Follows Birds and other Khamraev films, for his own comeback film The Legend of Suram Fortress (1985).

By the way, Without Fear and Man Follows Birds remain completely unavailable on DVD both in the U.S. and oversees. This is likely to be your only opportunity to see them for some time.