The Film Society of the Lincoln Center is showing the cream of the crop of Ukrainian cinema on September 7-12 in a series entitled “Capturing the Marvelous: Ukrainian Poetic Cinema.”  All of these films are nothing short of dazzling and some of them are not readily accessible on DVD with English subtitles, so if you live in New York you would be crazy not to catch them on the big screen. I write about most of these films in my forthcoming book on Sergei Parajanov, so they are still very much fresh in mind. 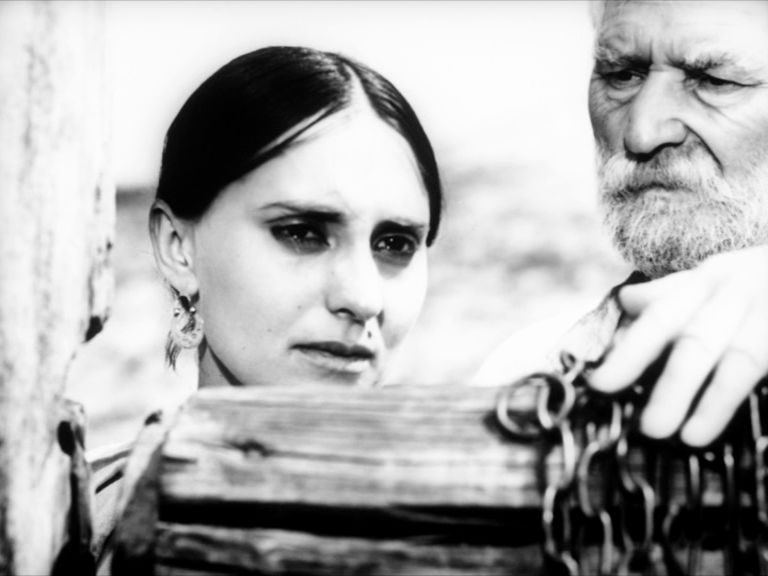 Broadly speaking, Ukrainian poetic cinema tends to focus on Ukrainian identity and culture (especially folklore), employs a painterly visual style and pushes the boundaries of film technique and narrative. The term “poetic” comes primarily from the films’ abundance of metaphors and symbols, but one can further extend the parallel with poetry as a literary genre and how many of the films use the language of cinema.

Generally, critics trace the origin of Ukrainian poetic cinema to the films of Alexander Dovzhenko. His silent films Zvenigora / Zvenyhora (1927) and Earth (1930) are readily available on video and are widely written about, so I do not need to belabor their virtues here. If there is an omission in the series, it is Dovzhenko’s first sound film, Ivan (1932), whose experiments in editing and sound likely influenced Ukrainian poetic filmmakers in the 1960s.

Sergei Parajanov’s Shadows of Forgotten Ancestors (1964) was his first international success and his masterpiece alongside the Armenian production The Color of Pomegranates (1969). Easily the most widely seen and discussed Ukrainian film after Dovzhenko’s Earth, it initiated the Ukrainian poetic cinema revival of the 1960s, which was based out of the Dovzhenko Film Studio in Kyiv. As with Shadows, the majority of these Sixties films were set in the past or in rural locales, a trope which the filmmakers used to explore questions of Ukrainian history and identity.

Yuri Illienko (1936-2010), the director of photography for Shadows, subsequently became a major director in his own right. His brilliant debut, A Well for the Thirsty (1965, also translated as A Spring for the Thirsty), based on a poetic script by Ivan Drach, was surely one of the most daring formal experiments ever produced in Soviet cinema. Virtually plotless and lacking dialogue for large portions of its running time, the film concerns an old man who lives alone since his wife has passed away and his sons have departed. The village where he lives is surrounded by parched soil, but the water from his well sustains the villagers and, years earlier, soldiers who passed through during the war. The man envisions a beautiful young woman, presumably his wife at a younger age, carrying pails of water. The densely textured film uses repeated visual and audio motifs to create a structure akin to a musical composition. Continuing the experiments with film stock that Illienko began while working on Shadows of Forgotten Ancestors, the film uses special high-contrast stock, at times pushed even further so that the stark black-and-white imagery looks like an engraving or ink drawing. The sound track is a complex audio collage of recited poetry, song fragments, cries and sound effects such as ringing bells; no doubt it served as a major source of inspiration for Parajanov’s use of sound in The Color of Pomegranates. The film ran afoul of the authorities and was banned until 1987, when it was finally released along with a number of other long-banned Soviet films.

Illienko’s second feature, The Eve of Saint John (1968) is an ambitious adaptation of Gogol’s story of the same name. (Arguably, a better translation would be The Eve of Ivan Kupala, since it refers to the summer festival that originated as a pagan fertility rite.) The film’s style and imagery attempt to recreate the phantasmagorical world of Gogol’s prose in cinematic terms through jump cuts and other forms of trick editing, exaggerated Ukrainian decorative motifs, and distortions of scale and perspective. Beyond that, Illienko tries to make the film into a meditation on Ukrainian history; at one point, the main character of Pidorka (Larisa Kadochnikova) is caught up in the Mongol invasion of the thirteenth century and subsequently witnesses Catherine the Great and Potemkin’s legendary tour of facade-villages in the Ukrainian countryside. Ultimately, the film seems overburdened with trick effects and was coolly received by Soviet critics, but it remains memorable for its extraordinary wealth of surrealistic imagery. It is an absolute must on the big screen.

Illienko’s greatest commercial and critical success was by far White Bird with a Black Mark (1970), which won the Golden Prize at the Moscow Film Festival in 1971 and drew 10.5 million admissions in the Soviet Union as a whole. Co-written by Illienko and its star Ivan Mykolaichuk (the star of Shadows of Forgotten Ancestors), the film concerns an impoverished Hutsul family whose loyalties are divided between the Soviets and the Romanians during World War II. It deploys a straightforward narrative and pointedly orthodox representations of negative figures such as the band of Ukrainian nationalist insurgents and the priest. But it also contains many of Illienko’s characteristic stylistic touches, including jump cuts, 360-degree tracking shots, and telephoto camerawork that strongly recalls Shadows of Forgotten Ancestors. 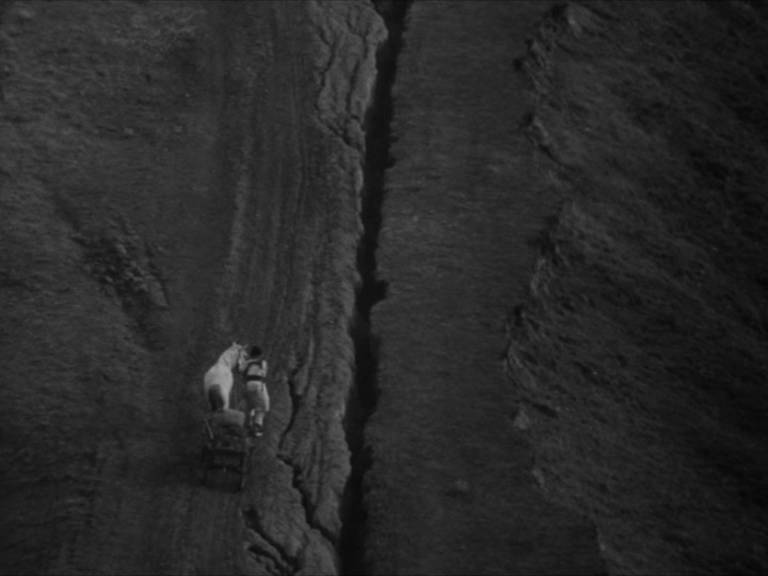 Leonid Osyka (1940-2001) may not be as well known in the West as Parajanov or Illienko, but The Stone Cross (1968) stands alongside their works on its own terms. Based on a script by Ivan Drach and adapted from the writings of Vasyl Stefanyk, it depicts an old man in Western Ukraine who tires of working his barren plot of land and decides to emigrate with his family to Canada. On the eve of his departure, he catches a thief on his farm and plans to kill him, but succumbs to compassion while his neighbors stand fast in their rigid code of honor. As a memorial to his life in his homeland, he leaves a stone cross on a hill. Especially noteworthy is the farewell party, which takes up about half of the 80-minute film. In a series of long takes, the camera circles around the villagers, following the old man while he approaches various individuals, speaks, and offers to drink toasts with them. The overall texture of the film is deliberately spare compared to the kaleidoscopic quality of Shadows of Forgotten Ancestors or The Eve of Ivan Kupala, and it depends more heavily on dramatic dialogue than A Well for the Thirsty. Still, a great deal of the film’s sense is conveyed through its expressive imagery, including intense close-ups of the villagers’ time-ravaged faces and the heavily flattened, almost abstract images of the countryside.

The Ukrainian poetic cinema revival continued through the early 1970s, though some of the films were banned or shelved, and others received only limited distribution outside of Ukraine. In May 1974, less than a month after Sergei Parajanov’s imprisonment on politically motivated charges of homosexuality, Volodymyr Shcherbytsky, the First Secretary of the Communist Party of Ukraine, publicly condemned Ukrainian poetic cinema and declared it “overcome.” Despite this, Yuri Illienko continued to make innovative works, though his first three films remained his strongest. Leonid Osyka’s subsequent output was more uneven. Still, the films shown in this series represent a major contribution to world cinema and the best postwar Ukrainian films alongside those of the Odessa-based Kira Muratova.

I'm currently the Film Studies and Media Librarian at Emory University in Atlanta. Although my primary passion and expertise is in film, I also love literature, music and other arts.
View all posts by James Steffen →
This entry was posted in Film, News, Parajanov. Bookmark the permalink.

6 Responses to Ukrainian Poetic Cinema at the Lincoln Center